The 22-nation Pew Global Attitudes Survey released recently says U.S.’s overall image has seen a significant slip of 10% in India compared to last year. U.S. continues to enjoy a favorable perception among Indians with 66% having a favorable opinion of the country, but, this figure is way lower than last year’s at 76%. A close look at the survey reveals an interesting pattern about attitudes of Indians towards America. For eg. 73% of Indians believe that U.S. will do the right thing when it comes to world affairs, 65% Indians support America’s war on terror, and, significantly 52% Indians are willing to support military action against Iran. It seems there is considerable political support for U.S. among Indian public opinion.


The 10% drop in the favorability ratings seems primarily to have been influenced by an attitude of pessimism towards U.S. as an economy post the recession. The economic meltdown also saw Indians, Indian Americans, and People of Indian Origins (PIO) rush back to India in droves for a better future. There were also considerable investments made by such people in the Indian financial system. Suddenly the american dream might have seemed hollow to many Indians and with an 8% growth rate presenting plenty of opportunities for upward mobility at home, U.S.’s image as a destination might have suffered. It’s worth noting that 57% of Indians surveyed said they are positive about the way the economy is being managed by the Indian government.
Also worth noting is the fact that the survey revealed public opinion in India is willing to pay increased prices to combat climate change unlike publics in U.S., France or Russia. The debate around climate change, extensively reported by the Indian press, might have played a role in influencing attitudes towards US contributing to the overall dip. In fact, India topped the Consumer Greendex Survey, compiled by National Geographic, which studied 17,000 consumers in 17 countries on consumers’ progress towards environmentally-sustainable consumption patterns. The survey found Indians to be the most most eco-friendly people while Americans the least.


The survey also studied Muslim attitudes towards Obama and found that favorability rating of Obama has dipped among Muslims in all countries surveyed. Curiously, the survey did not take into account the viewpoints of Indian Muslims – the second largest Muslim population in the world. 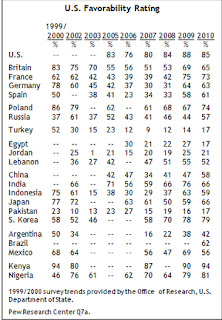