A communication approach for the United States in the Middle East

Reuters today filed a story with the headline: “Western embassies on alert as Muslim anger simmers over film”. As I read the news, picked up by all major newspapers of the world, my thoughts go back to the Arab Spring when it started. With the fall of dictators, there was hope all around. Finally, the Middle East seems to be opening up to newer possibilities. I remembered my college history lessons and felt that newer possibilities may not necessarily be what we think or want them to be. A year later, the mood has changed indeed, in US and also in the newly liberated and fledgling ‘democracies’ of Tunisia, Libya and Egypt.

The recent crisis has actually increased the importance of communications for the United States. It’s a new reality, an uncertain environment. The luxury of stable dictatorships to engage with is no longer there. Unpredictability will reign.

I believe communication and engagement efforts of United States should just focus on 3 things: 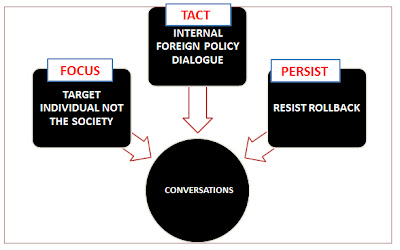 What do you think?

-- Madhur
Email ThisBlogThis!Share to TwitterShare to FacebookShare to Pinterest
Posted by Madhurjya 1 comments