The Australian High Commission in New Delhi is doing a United Colors of Benetton. The walls of the embassy building and the visa office look like giant billboards with happy and colorful pictures of “Australians” - of different races, national origins, skin color - being displayed. Huge billboard size pictures all, happy and together, with the words “Multicultural Australia” in bold. There were pictures of Asians, Africans, Arabs, Anglo Saxons and also Indians. This did not exist earlier, definitely a first in the capital, as the Aussies try to look coherent in their denial of racist attacks on Indians in Australia.

The straight talking Aussies suddenly are defensive and fumbling for answers in the face of a relentless campaign by Indian media. Australia’s image has never been so badly dented in India. In all their official communication, the Australians have denied that these attacks are racist, and, an attempt is being made to club them with regular street crimes. Then, they announce a person of Indian origin (Peter Varghese) to be the next High Commissioner to India, also announce that they are sending the largest contingent to Commonwealth Games in India and put up billboards on embassy walls to counter the negative publicity. Despite all this, there was a 46% drop in student applications to Australian campuses from India this year. India contributes the most to Australia’s $ 15 billion education industry.

Where the Australians are going wrong is in their failure to acknowledge the possibility of a ‘pattern’ in the violence. This acknowledgment is lacking in all their communication (which has been very few) to Indian media. It is not a question of whether the country is safe or not. Rather than denying the possibility of racism altogether what should be communicated is that the Australian system is sophisticated and sensitized enough to grasp the nature of the problem and then deal with it. The comments by the Victorian Police Commissioner on safety statistics do not help and one wonders why is he speaking to the media at all? Discrimation/racism exists in every society and all claims to the contrary is total B******* … everybody knows that, especially Indians who live amidst diversity and conflicts all their lives. Anybody who has ever lived in a different culture also understands that some form of Aversive racism exists in every society. It’s human.

There is a convergence of strategic interests between both the countries. The bilateral relationships, trade, people to people contacts have never been so good. Both have an interest in the stability of Asia and preventing Chinese dominance of Asia. Besides, Australia too wants to be seen as a part of the Asia Pacific Community rather than being seen with the western bloc. However, the Australians need to be proactive and communicate better and LOOK SENSITIZED in the media. Their communication now seems more like defensive posturing or just plain gimmickry. 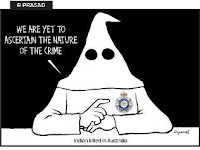 Email ThisBlogThis!Share to TwitterShare to FacebookShare to Pinterest
Posted by Madhurjya 0 comments

Potential of text messaging for Public Diplomacy in India

Of all the different mediums that are available for practitioners of Public Diplomacy to engage India, mobile phones remain underutilized. Mobile phone penetration in India is huge. It is the fastest growing mobile phone market in the world with companies adding over 15 million users every month. As of March 2009, India has 392 million mobile phone users. This figure is expected to reach 500 million beginning of 2010, and by 2015 the country is expected to have a billion plus users.

With the high penetration of mobile phones, text messaging has become an important tool to educate, inform, mobilize, engage Indians. India’s recent elections saw political parties using text messaging for campaigns. Civil society groups too have made innovative use of text messaging. A campaign that comes to mind is Sachche ko Chune, Achche ko Chune (Vote for the Honest, Vote for Good People), by the Association for Democratic Reforms, or ADR, a non-governmental organization (NGO). This was a SMS campaign that lets you send a text with your zip code, and, ADR sends the latest information about one’s constituency and the candidates contesting elections. NDTV’s campaign seeking text message signatures from the public to build pressure on government’s prosecution machinery, in the high profile Jessica Lal murder case, is also well known. Corporate groups already are making good use of text messaging in customer servicing from placing requests, generating feedbacks to paying bills etc.

Recently, Google launched its SMS text message service in India, www.google.co.in/sms, (already available in US) for mobile phone users who wish to find out information from Google about business listings, movie showtimes and other local or web information by sending queries to a specified number from their phones. Apparently, mobile phone users who do not have web browser or Internet access via their phones can still ping Google for information via SMS.

Mobile phone, especially text messaging, is growing as a preferred mode of communication in India. Cellular operators, too have been really enterprising with their tariff plans and handset prices and in India it is very normal to see a petty shopkeeper or a rickshaw puller flaunting a cellular phone. The potential for engagement is tremendous through this medium for creative minds.

-- Madhur
Email ThisBlogThis!Share to TwitterShare to FacebookShare to Pinterest
Posted by Madhurjya 1 comments